The Royal Motor Yacht Club has a long, and royal, history. The original Motor Yacht Club was founded in 1905, and opened its premises at Point Piper in December 1910. By 1927 it was the largest such Club in the world with a membership of 150, when King George V deigned to bestow its ‘Royal’ prefix. Today it retains that early prestige, though the world, and motor yachts, have changed substantially. 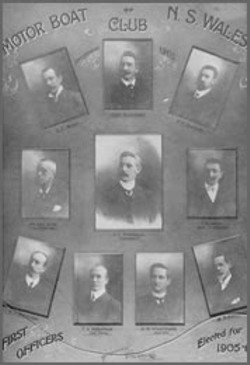 In the 1800s Yacht Clubs began to appear in Sydney. However, it was not until the interest shown in Mr. E.E. Sayers’ motor boat Pearl when it made the first ocean motor boat trip in Australia in 1902, from Gosford to Sydney, that motor yachts started to appear on Sydney Harbour.

The Motor Yacht Club was conceived in Sutton’s Buildings in Pitt Street, when an unprepossessing, bungalow-style clubhouse at Point Piper, Rose Bay, was purchased. It had a jetty running into deep water and opened on December 10, 1910.

Social activities increased due to the new premises on the waterfront and racing took off. The Club members enjoyed the post-war ‘Roaring Twenties’ as much as many others. For example, on August 31st, 1922, at the Paddington Town Hall, the annual Motor Yacht Ball saw tangerine flowers and miniature boats of wattle lining the walls, plus cartoons of boats and seagulls as decorations. The orchestra sat in a large floral motorboat. The height of society was there!

The great efforts of Commodore G. Weymouth and Vice Commodore Stuart F. Doyle were instrumental in conferring the prestigious prefix ‘Royal‘ by King George V in 1927;  the first time this honour was afforded a Motor Yacht Club outside of Britain. At the time, it was the largest such Club in the world, having increased in a few months from 30 Members to 150. With the conferring of the ‘Royal’ title to the Motor Yacht Club in 1927, boat owners were allowed to apply to fly ‘The Blue Ensign Defaced’. The first batch were approved that same year and were keenly sought after. 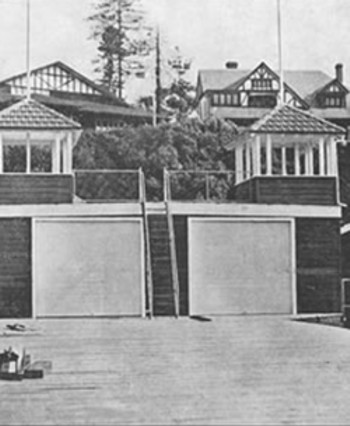 In 1959 land on the Club’s northern boundary was purchased, allowing the building of a barbecue area and a bar. In 1961 an expansion of the site, including the construction of a new Marina, a new enlarged Clubhouse and increased decking in front of the bar was undertaken, allowing for greater social activity. The marina was filled almost before it was built.

In the seventies, the social life of the Club came to focus on outdoor dining, on the patio at the weekends. The swimming pool, constructed in 1970, was very popular with families and the Friday night dances.

On August 27, 1984 disaster struck the Club as a fire destroyed the speedboat shed and bar, kitchen, stores, toilets and part of the marina. Twenty-three speedboats were destroyed along with equipment in the building. Boats on the marina were saved by the quick and courageous work of staff and firefighters.

The volunteer efforts of a number of Members, and donations by a group of Members known as the ‘Marinated Mariners’ allowed the activities of the Club to recommence. A fund-raising drive resulted in $800,000 of donations, and the rebuilding of what is now the Marina Restaurant and Bar commenced in May 1987.

During the 1990s successive Boards took a new direction towards families by refurbishing and heating the pool, building a children’s activities centre, introducing children’s menus, swimming lessons and providing space for dinghies and personal water craft.

In 2000 the old timber marina was demolished and a new concrete floating marina, with the most up-to-date technical advances in marina design and facilities, was installed. In the ensuing years a new swimming pool was built and the Marina Restaurant and Bar refurbished.

From our humble beginnings in 1910 at Point Piper, as shown in the photo on the left, to our present facilities as shown  elsewhere on this website, Members of the Royal Motor Yacht Club continue to enjoy the best harbourfront, motor boat facilities in Sydney.